Ford EcoSport Facelift is all set to be launched in India and while there has been no official announcement of the launch date by the company, it is expected to be unveiled during Diwali, this year.

For the last couple of years, Ford EcoSport has been the holy grail for the American automobile manufacturer in India as the compact SUV has maintained its position in the most sold cars in the segment. Due to its 1.0-litre EcoBoost engine, a bulky stance and easy maneuverability in congested areas, Ford EcoSport has become one of the most preferred compact-SUVs in India. Keeping this in mind, Ford will be unveiled its mid-life facelift with both mechanical as well as cosmetic updates to keep up with the competition. 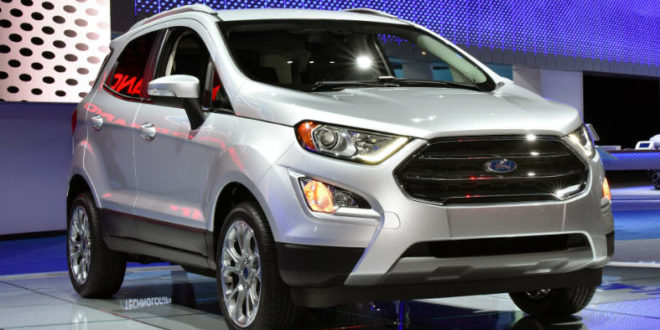 One of the major expected addition to the Ford EcoSport Facelift is the all-new 1.5-litre Ti-VCT naturally aspirated three-cylinder petrol engine, mated to a 6-speed DCT automatic transmission, churning out 120 bhp of max power and 150 Nm of peak torque. Ford has recently revealed the engine which is lighter, stronger as well as more efficient than similar powerhouses from other manufacturers.

The Ti-VCT tech on the 1.5-litre Dragon Petrol engine is an aluminum block which comes integrated with exhaust manifold for quicker heating of the catalyst, thereby reducing emissions and reducing NVH levels. Each intake and exhaust cam functions independently, delivering faster throttle response and even higher fuel efficiency. The bore and stroke ratio has been optimised to achieve higher torque output with the 1.5-litre Ti-VCT Dragon Petrol Engine, at lower speeds. The new motor is also cost-effective as it uses 80 percent of Indian components.

“We feel proud to offer some of the most advanced powertrains from our stable, ranging from 1.0-litre EcoBoost engine to the 5.0-litre V8s. With India being centralized in producing our new, highly advanced petrol motors, we remain committed to making in India.”

Ford’s will be manufacturing the new 1.5-litre Ti-VCT Dragon Petrol Engine at its Sanand factory in Gujarat for domestic as well as export markets. While the factory started its operations last year, and now has an annual production capacity of 2,40,000 vehicles as well as 2,70,000 engines, with the new 1.5-litre petrol engine to be produced at this factory, it will also become Ford’s global hub for manufacturing compact cars and low displacement engines.

As for the Ford EcoSport Facelift, it is expected to come with a bunch of like a new front grille with beefier slats as well as heavy chrome details, revised projector headlamps, new angular fog lamps coupled with an all-new front bumper, new alloy wheels and revised taillamps.

As far as the interiors are concerned, Ford EcoSport Facelift is expected to come with a new stick out display housed in the touchscreen infotainment system. It will get SYNC 3 Ford’s in-car connectivity system equipped with Apple CarPlay and Android Auto support. Moreover, the Ford EcoSport facelift is more likely to get a revised upholstery, keyless entry among various other creature comforts.