Home Automobile Best Bikes In India That You Can Buy Instead Of An iPhone... 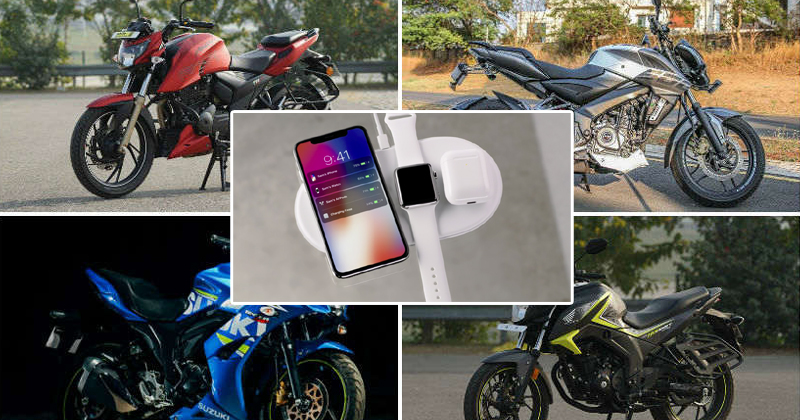 Apple has released their new smartphones, iPhone 8, iPhone 8 Plus and the flagship iPhone X which is said to be the most expensive phone from the company’s stable. Howe expensive? Well, in the US, it will cost interested buyers $1149 (Rs 74,000 approx.) for the 256GB internal storage variant but when it makes a touchdown on Indian soil, it will be priced at Rs 1,02,000, which in all sense, is a huge sum to pay for a smartphone, even if it is the iPhone X.

However, the iPhone X is not just an ordinary smartphone and comes with a striking new design, augmented reality features, bezel-less and edge-to-edge screen, dual cameras and face recognition technology for unlocking the device. But all these extravagant features come at a cost which has shattered all barriers of pricing.

The iPhone X is the first smartphone from Apple’s stable that is going to cost more than Rs 1 Lakh in India, the same amount of money that can be spent on buying the best bikes in India.

Also Read: 5 Unique Features In iPhone X That Apple Is Betting On

How enticing the iPhone X might sound but the price tag seems a bit too much at first glance even for the 64GB variant that will be priced at Rs 89,000 in India. And India being a country where a majority of the population comes from the middle-class that wants to save for the future and spend for status at the same time, they might face a dilemma of choosing between the iPhone X and the best bikes in India which comes with a similar price tag.

To put things into perspective, here are the five best bikes in India that you can buy instead of an iPhone X.

The highlights of TVS Apache RTR 200 4V is the engine refinement and additional performance in a sporty yet well-acclaimed handling package, making it an ideal motorcycle for everyday commute and corner carving, as well.

This full-faired 150cc bike with a 4-stroke, single cylinder, 2-valve, air-cooled engine has seen a huge success in India. While the engine is rating to produce 14.8PS of peak power at 8000 rpm and 14Nm of peak torque at 6000 rpm, it is capable of reaching a top speed of 120kmph.

One of its major highlights is the light curb weight of 140kg that makes Suzuki Gixxer SF
a great handler, be it in traffic or during a drive in hills. It comes with features like fuel injection and ABS, is priced from Rs 77,453 to Rs 81,529, ex-showroom, Delhi.

To give our readers a choice, we have listed Bajaj’s sole cruiser that has enjoyed immense popularity in India over the years. It comes with a 220cc, air-cooled single-cylinder motor that makes 19.03PS of power and 17.5Nm of torque.

Bajaj Avenger 220 is offered in two versions, one with tall, cruiser-style handlebars as well as spoked wheels while the other comes with lower handlebars and alloys. On road prices for both the variants are near the Rs 100,000 mark, making it one of the biggest contenders in our list of Best Bikes In India That You Can Buy Instead Of An iPhone X.

The Hornet has emerged as one of the best bikes in India in the premium 150cc bike category and it essentially is a CB Unicorn 160 with a more stylish design. CB Hornet 160R is powered by a 162cc, single-cylinder air-cooled, engine, making makes 15.6PS of power and 14.76Nm of peak torque. The sporty road presence, great handling for daily commuting as well as weekend rides, makes a perfect ride for the once living in metro cities. The bike will cost you around Rs 96,500 to Rs 1,01,400 in Delhi.

If you are a tech enthusiast, you probably won’t mind spending Rs 1 Lakh on the iPhone X but if there exists an auto enthusiast in you, even to the slightest extent, after reading this, we bet you would be thinking about your next step.

What will you pick, an iPhone X which will have a successor next year, or one of these Best bikes in India?